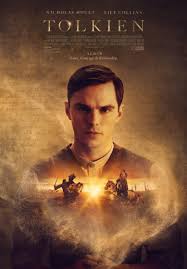 For those who have an acquired taste for movie watching and don't bore easily with the sometimes necessary pace required to depict how greatness is achieved Tolkien has no choice but to move slowly into the evolution of how language is formed.

Language is not stolen but inspired....
Professor Wright

It is through the story of Tolkien we learn that language is not developed just through pronunciation of words, but through it's meaning, association, and most importantly what is felt by the individual when the words are spoken.

This feeling and love of language was first planted at a very young age by Tolkien's mother's story telling and recitation of philosophers. Tolkien (Played By Nicholas Hoult) used language to cope with tragedy creating a world that he would eventually open up to us all through his own writings and story telling.

Throughout the movie Tolkien takes a journey with three childhood friends one who may someday be a great writer like himself, suppressed in his chosen profession as a great poet Jeff, academically challenged Robbie, and last but not least fun loving Christopher.All make a pact to forward their futures and form a group and use the words of a famous writer to help assert themselves as they mature in society.

Tolkien enters a slow progressing love affair with Edith (Played by Lilly Collins) a musician who has lived a life of conformity and takes an interest in what Tolkien initially thinks is ridiculous- his imaginative use of language- which to his surprise offers moments of escape to Edith.

It is Tolkien's Professor, Professor Wright who brings to Tolkien's attention after a night of sorrow and drunken rage of ranting and raving using his made up language, that Tolkien is told that his words are not ridiculous but instead the beginning stages of how a new language is formed.

It is at this point that Tolkien begins to take his language seriously, but his education is cut short as Germany invades England. After facing death and salvaging his relationship with his lost love, he later goes on to develop his language and writes one of the greatest stories of all time using the interpretive words of language called "The Hobbit".