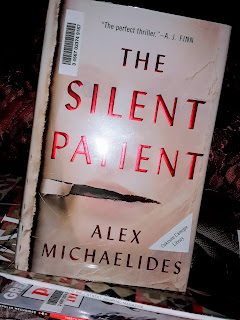 Well I finally finished The Silent Patient by Alex Michaelides reading 150 pages in one night.  It took me a little longer to finish it, because I left the book home when I went to Philly to visit family.  It would of been a perfect book to read in my downtime in Wildwood, NJ. I even received a notice from the library only to find out when I tried to renew that there were 79 holds and I had to return it.  Luckily for me the librarian gave me until the 23rd to finish.  I am happy to say I finished 3 days earlier than what I expected. The book was just that good.

After reading The Silent Patient, I'm officially going to have to retire the word "Shady" because pretty much that's how I described almost every character in this story.  The Silent Patient tells the story of Alicia a painter who is married to Gabriel and a psychotherapist named Theo who tries to help Alicia out of silence after she is sent to an insane asylum for killing her husband.

Alicia who was known for her artwork became infamous after the murder of her husband because of her silence and a self portraying portrait she painted in the likeness of her husband and herself called the Alcestis which has roots in a story told in Greek mythology.  The only evidence left for people to wonder, speculate, and assume Alicia's guilt was a painting that drew crowds worldwide.

As Alicia sat silent for years in an insane asylum, Theo a psychotherapist with a past is determined to help Alicia break from her silence when no other therapist or doctor has been able to succeed in years.  He applies for a job where Alicia is committed and is hired.  Immediately he is taken back by Alicia presence, the mystery behind her silence, and the frustration of not being able read her emotion even when coming face to face.

As the new psychotherapist at The Grove, Theo encounters Diomedes who is in charge of Alicia's psychotherapy. Diomedes admires Theo's zeal to help Alicia, although he doesn't think he will have any success because he had tried for years and given up, he still allows Theo to try, thinking nothing will come of it.

Immediately Theo encounters deterrence from staff and patients when attempting to break Alicia's silence. Specifically with Christian Alicia's psychiatrist who appears to over prescribe Alicia with medicine. There's other staff and patients Yuri, who sometimes appears to be on Alicia's side but dabs in illegal narcotic behavior by dealing medicine, and Elif who has bouts of crazy behavior throughout the book.

Theo realizes the only way he is going to help Alicia is by understanding how she became who she is today.  So he starts an investigation of her past leading up to her being accused of murdering her husband.  This is when the shadiness scaffolds.  Theo visits Alicia's childhood home and is greeted by an Aunt who hates her and a tall brolly cousin named Paul who seems to be stuck mentally in adolescence because of his controlling domineering mother. It is here in her childhood home he learns things about Alicia's mom and dad that are troubling.

Theo also pays a visit to Gabriels brother Max Berenson whose demeanor frightens him when he tries to learn the dynamics and inheritance details that results from Gabriel's death. He later visits Jean-Felix Alicia's art studio partner who from the start seemed to be holding something back from Theo as he tried to learn more about Alicia and what inspired her art specifically the Alcestis painting.

Everyone around Alicia Christian, Paul, Max, Jean-Felix carried a piece to the puzzle of Alicia's past that helped lead to and maintain her silence.  Theo is determined to help Alicia put those pieces together, and even as he learns more about Alicia's past he formulates a way for her to do so, by painting.

Theo receives permission from Diomedes to allow Alicia to have an art studio at The Grove (insane asylum), miraculously Alicia starts to paint and as her painting burns into the mind of Theo.  Theo's troubles at home come to the forefront with his wife Kathy when he learns a secret that he tries to suppress in efforts to help Alicia break her silence.

This book is a page turner.  I did not want to put it down. I honestly can say I did not expect its ending. I literally yelled out loud OMG!, Wow!, the ending took me by surprise. If you are reader that likes "spin", this is a book to read.

Book Review By
Nikola T. Naylor-Warren
Send e-tickets and e-books to
NikolaReviews.com
NikolaReviews@gmail.com
Mail Books, DVD, CD's for review to 1259 Taylor Ave New Kensington, PA  15068
I randomly pick which to review and you may pay me to specifically review your material.
at July 20, 2019 No comments: