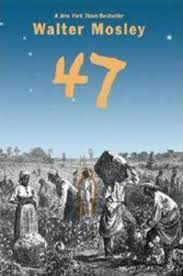 My teenage daughter picked up Walter Mosley's book "47" on a whim in the young adult section.  While we were in the car together, she started to tell me about the book.  I was immediately interested when she begin to describe the characters "47" and Tall John. I asked her if I could borrow the book. I hadn't really entertained reading a young adult book, but I found Walter Mosley's book to be a re-education of sorts that young adults and adults could take lessons from.

"47" is about a young boy who had to find a lifeline to survive a labyrinth of abuse and oppression during an era of slavery that many have allowed to dull from memory. The book begins with a young boy who lives with an awareness that his existence has been despised from birth, being blamed by  Master Tobias for killing both his slave mother who cared for the masters wife, and later the master's wife who was broken-hearted by the death of her house slave.  The only role that 47 played in either death was his birth.

Too young to enter the slave shack 47 lives in fear and observation of the future that is soon approaching him as he comes of age, and looks ahead at the doom, abuse, grueling ritual routine of daily field labor that awaits him when Master Tobias sends him to the slave shacks.

Immediately when 47 is sent to the adult slave shacks, still too young for the hard labor, but sent early because of the hate and resentment Master Tobias has for him, he is introduced to Pritchard, a bitter slave toppled with a condition that allows 47 no mercy.

Overwhelmed, with the fear of death, and an inability due to size and age to do what is expected of him, 47 is thrown a lifeline when he meets a seemingly disguised educated lost/runaway slave boy who outwardly displays himself as an Uncle Tom named Tall John.

Tall John introduces a philosophy of freedom for slaves that 47 never thought was possible. The lost/runaway boy Tall John is rumored to be a healer amongst slave masters.  Tall John who is seemingly submissive and compliant to Master Tobias begins to secretly educate 47 in defiance of slavery.  Tall John teaches 47 about the medicinal secrets of his native land used to heal. He also esteems 47 and promises him a future of freedom.

Despite Tall Johns healing abilities both boys face a harsh and brutally unfair reality of being seen as a threat for knowing more and doing more even as they aid in healing Master Tobias ailing daughter.  Service during slavery is sometimes a curse for slaves if it gives a slave an upper hand that slave masters feel makes a slave seem more superior.

Much has been learned from reading Walter Mosley's book which is freedom isn't given, it must be taken, a choice that could come with penalty. Freedom is an act based on principals demonstrated by the choices we make everyday, despite the penalty. For slaves it was more than civil disobedience, each act towards freedom meant most often death and not punishment.  The alternative to freedom was unbearable torture.

At times this book was hard to read. Although it is a book of historical fiction, it read more like a parable of lessons. The book 47 teaches readers that the mentality of slavery has to be first altered in the mind, next how one sees him or herself, not through the eyes of the slave master, but as someone greater. Tall John begin to make 47 believe, once your self-image and vision has changed, then one possesses the power to force conditions to change, despite the penalty. Freedom!


I learned today on CNN listening to Spike Lee's interview with Anderson that it was 400 years ago this year, that slaves were brought to America.

NikolaReviews Gives "The Best Of Enemies Two Thumbs Up" 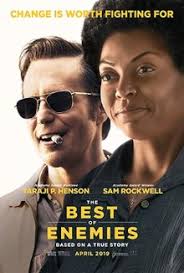 I saw a movie the other day "The Best Of Enemies" that I've been thinking a lot about, it chipped away at my resentment due to a surgery I had and has made me see "service" in a different light. What gave this new perspective even more value was that two people Ann Atwater played by Taraji P. Henson and Claiborne Paul (CP) played by Sam Rockwell held resentments much deeper and ever present then I think I could even fathom before 2015.  Sacrifice and Service does mean something to people and can penetrate even the deepest wounds, I know it is true because I feel my stubbornness in typing this.

For the most part of my life I looked at service and volunteering as a willingness of the heart, something that's supposed to feel good, the reciprocal inner reward of being the hero to the rescue. I never thought service could come or should come from a place of resentment. I think I never really imagined it could come from any other place other than love and willingness. If my heart wasn't in it, I thought it to be appropriate to just say "NO", in efforts to be authentic and genuine.

However my perspective has changed after watching the story of Ann Atwater an African-American social and union activist/leader in North Carolina, and Claiborn Paul (CP) head of Klux Klan Clan sector come together with a force that was full of bitterness, hurt, and anger from a history of segregation, violent acts of intimidation, racism, that was currently present when they were asked to organize a "Charrette" "something no one had heard of") to determine if the schools should desegregate after a school fire. Neither wanted to or were willing to lead the "Charrette", but out of pure bitterness and hatred both were afraid to allow members with softer views to lead. Ann Atwater thought some blacks were too educated and wealthy to understand the struggle of under privileged blacks in North Carolina and for CP, he and his Klu Klux clan members were afraid to let whites lead the Charrette who identified with the black struggle. 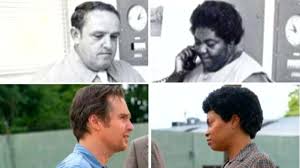 In this movie a town divided were forced to come together,  in hopes to PROVE that they should stay apart, only to learn that there prejudices were based on falsehoods and preconceived notions that developed from "separatism." In simple terms, "basically not really knowing or understanding the other."

Threatened that the courts could make an unfavorable decision that would not go well for either the blacks or the whites of the community. The townspeople were given a chance to work together over 10 days to come to their own decision that the court system would honor.  It is during this duration that Ann and CP are forced to learn about each other, the causes of their flawed, difficult personalities, developed historical hatred, and last but not least the struggles of survival which they witness the DUPLICITY OF THEIR HUMANITY, when combating the fears of fellow peers, the economic struggle of family life for both CP as a business owner, with a disabled son, and Ann Atwater with the insufficient conditions of her people and her unrelenting leadership.

Frustrated and resistant against their own observation of humanity in  "the other", begrudgingly at different times during this movie both sacrifice and give service in a reciprocated sort of saving grace.When peoples lives and lively hoods are on the line and the spirit moves you or forces you to put aside your resentments to help a person in need a sort of magic, transformation, or God's grace can occur. It's a bitter, hard move, that hurts, but can sometimes offer you what you least expect.

Movie Review By Nikola Naylor-Warren
at August 04, 2019 No comments: