Nikola Reviews Gives Two Thumbs Up to The Current War 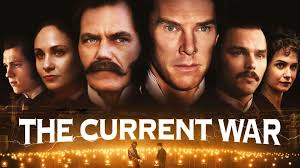 First it should be mentioned that it was America who first brought light to the world.  However, how and in which method light would travel throughout the far ends of the world is retold to movie watchers in the fact based historical film The Current War.
The Current war is about the expansion of invention. Thomas Edison played by Benedict Cumberbatch invents the lightbulb, the 1st man to bring electrical light to earth. However, the question then becomes how far can that light travel?
George Westinghouse played by Michael Shannon sees an opportunity for expansion of Thomas invention, however, what should of been a collaboration of mind and money becomes a war. A war of scientist versus entrepreneur.
Westinghouse is a wealthy business man and an entrepreneur. Entrepreneurs are often able to grasp and conceptualize ideas that are intricate in combination with noticing a demand for supply and the reward of profit. As a result of this skill Westinghouse uses technical experts to design his inventions for market.
Thomas's passion is inventing not profit. Because of this fact he is often blinded by his focus to see the necessary components needed to expand his inventions.
Nikola Tesla a futurist played by Nicholas Hoult is hired by Thomas at low wage and presents an overlooked necessary concept for expanding light by offering the idea of designing an alternator to Thomas right away but is ignored. During this same exact time Westinghouse has also thought of inventing an alternator that would expand Thomas's invention and takes advantage of the idea and does it, requesting patents by copying some of Thomas's invention to do so.
Sam Insull,Thomas's assistant played by Tom Holland is observing and watching this all unfold and although he is awe of Thomas's brilliance he also sees his dismissive attitude towards the ideas of others.
JP Morgan played by Matthew Macfadyen a banker and financier is willing to put his money where he will get the greatest return and uses the war between Edison and Westinghouse to his advantage by offering his backing to the inventor who unfortunately, it turns out. presents not the best product but the best profit and pitch. You have to watch the film to see what happens.
In The Current War there are several elements of war at play.

This movie is excellent and unfolds a larger story that explains how each invention and contribution from each inventor helped light the entire world and it started here in America.